The Olivier Berni Intérieurs decoration agency is showcased by one of the most prestigious publishing houses on the Chinese market. The book "French Style Villa", which covers interiors inspired by the French decorative style, features one of the agency's latest projects. It is for Olivier Berni Intérieurs the occasion to expose the agency's work and sources of inspiration.

Birth of a project

To turn a vast Haussman-type apartment into a characterful residence. such was the challenge originally proposed to French interior designer Nicolas Berni. He decided to take up the challenge and designed two separate living spaces: on one hand, the reception rooms with a sumptuous decoration and on the other hand, the living areas with a more intimate atmosphere.

The entrance hall, both martial and warm in style, is an intentional homage to the famous Hall of Paintings of the Château de Malmaison. Olivier Berni chose to put together furniture and light fixtures typically associated with the French Empire style, the centerpiece of which is an Amboina wood banquette with rosewood fillets and a coral velvet upholstering. This galery opens up on one end to the dining room and on the other end to the library, which itself allows access to the study and the lounge. The dining room – in the middle of which hangs a majestic contemporary chandelier made with crystal droplets – is a perfect blend of antiques, amongst which a very beautiful mercury barometer with behind glass dating from the Charles X era, and pieces of furniture of an eclectic style. The library, made with classically imbued wood panels, offers the visitors a lovely collection of prints representing views of Paris. The lounge, vast and full of light, is structured around a central axis starting with a marble fireplace and its 19th century trumeau with a Caracalla bust on a decorated lining. On either side of this axis, tailored-made pieces of furniture have been laid out, upholstered with rich brocades and enhanced with decorative trimmings. 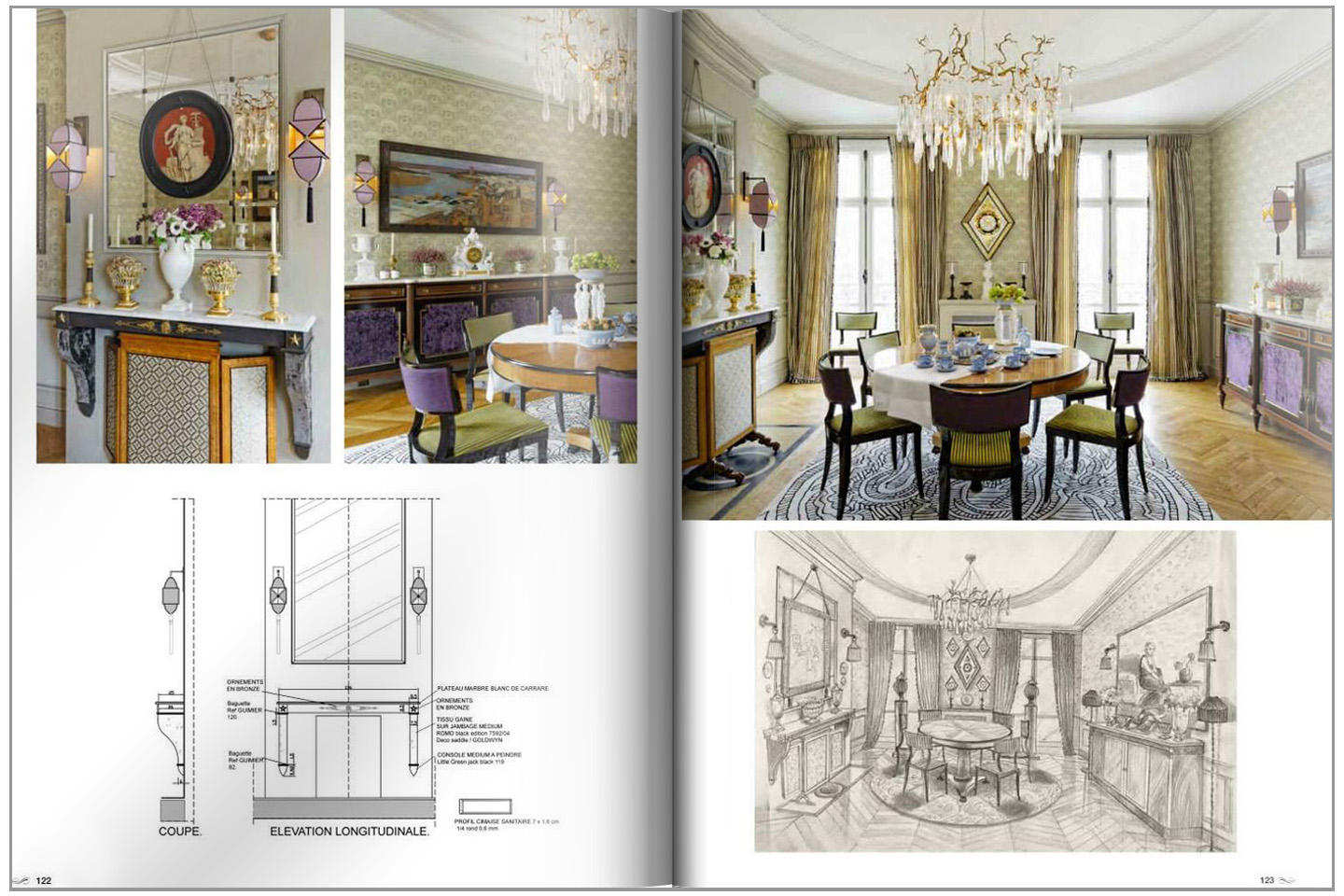 The more intimate living areas, such as the master bedroom area with its walk-in closet and en-suite bathroom, were designed in the manner of a hotel suite. The impression of comfort and voluptuousness emanating from it, notably thanks to the use of volumes, is combined with materials and hues in shades of grey, accentuated by touches of gold and mauve.

A large selection of French antiques from the 18th and 19th centuries were put together and combined with a great selection of fabrics from Parisian editors. The result is a decorative project with a resolutely atypical style, where sophistication meets tradition. The harmony of colours, brilliantly executed by interior designer Olivier Berni, is one of his most striking signature features.

The singularity of French interior design

Interior designer Oliver Berni was given the task to write one of the prefaces for the book "French Style Villa". He exposes what makes, according to him, the specificity of French decorative arts and what constitutes a typically French style of decoration.

« France is certainly one of the countries in the world with the strongest tradition in the field of decorative arts. Globalisation has undoubtedly reinforced such specificity with a growing interest in French savoir-faire. The French decorative style, with its centuries-long history, seduces those customers who are more interested in a certain spirit rather than a "total look" for their interior. From the height of French decorative arts – the epitome of which is the palace of Versailles – to the emergence of numerous art movements such as Art Déco, the Empire style or eclecticism, the French have often been trendsetters on the international art scene.

With its rich history and numerous trends, it is thus no easy task to try to define what makes the French decorative style. If, however, one dared to give a definition, one could perhaps talk of a style both irreverent and yet respectful of artisanal traditions. While the English decorative style is often described as eccentric, and the Italian one as traditional, the French style is often associated with harmony. France, indeed, excels in the creation of interiors where classicism and modernity meet without ever clashing with one another. Many agree that the French style is the fruit of the successful blending of elegance and trend with a view to express refinement in every detail. 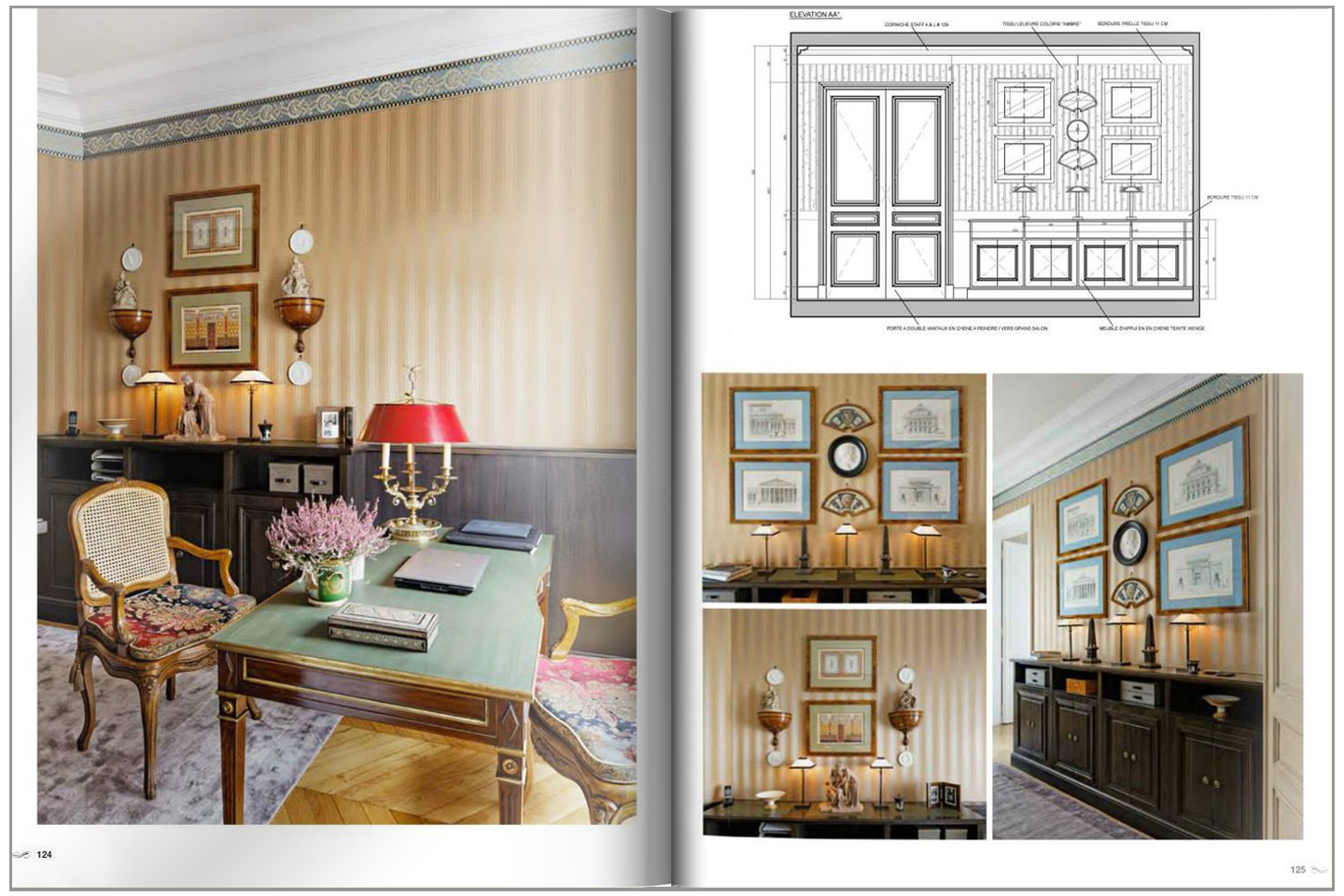 Even though the French decorative style is resolutely part of a long historical tradition, it is also the fruit of individual experiences. The French style is indeed known and renowned all over the world thanks to great names in the field of decoration. Several generations of interior designers have contributed to shape its reputation. The rearguard, made up mainly of forty-something "dandies", is now looking to free itself from its dogma. Many blend decorative genres, break away from traditional lines and ensembles and dare to use colour – in order to step away from the abiding good taste that is the hallmark of the French decorative style. It is yet again the opportunity to demonstrate that there is no such thing as a single French school of decoration, but rather a common culture nurtured by a variety and multiplicity of influences. »